Blessings of Social Media – Is it a fact or a myth?

How Social Media is changing us

What is Social Media? How does it benefit for humans? Is it at all harmful to humans?  Is it a curse or a boon? Is it leading us to sky-rocketing developments or debasing the humans? What is the true nature of Social Media? These questions, now, have become a controversial issue, combating to which is a dire need of the hour.

There is no denial to the fact that man is a social animal. He knows to live in community or groups. Isolation is no less than an imprecation for him which plagues his inner capabilities. It will be not wrong to say that without social association, the difference between man and animal will not be viable. Thus, being a social animal, man’s need to connect with each other is a primordial drive. Even to fulfill his basic needs such as food, clothes, and safety, social association and affiliation is a must.

However, there are multifarious myths about social media that reveal two elementary aspects. The first is the trepidation with new technologies. The second is the antediluvian postulation that the traditional ways to do tasks are “right” and the latest ways are apparently mesmerizing but in real they are counterfeit and bogus that’s like a heap of garbage that has nothing but ill-smell.

People of this pessimistic approach think that social media are demolishing us morally, destroying our skills and replacing offline relationships. Also for a lot of US companies, social media is blurring the boundaries between work life and social life. Here is what a recent research shows us: 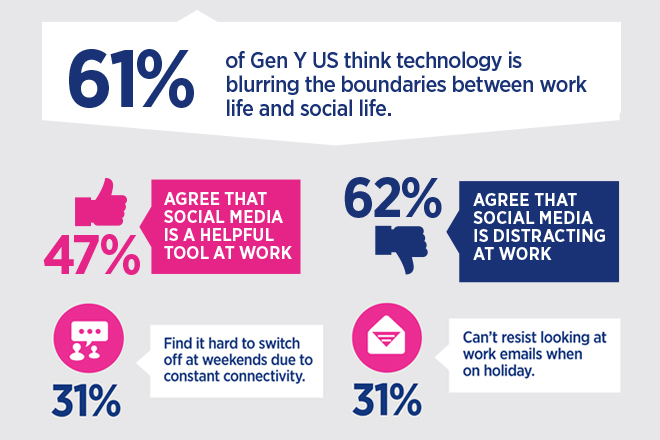 The people having this opinion, neglecting the results of all researchers which have shown that social media have improved relationships by giving connective “glue”, by making stronger offline relationships. It can tie us to people and chances that would have been impossible and inaccessible without it. They also condemn on social media by stating that people on social media don’t tell truth. Man’s nature has no link with social media. To some extent, it can be agreed, people make fake ids or hide their identification, but the question is; is it only on social media? No, at offline relations? What an absurd thought! Corrupt man always remains corrupt, it doesn’t matter he has online relations or offline. The people of this school of thought justify themselves by raising the question; do social media do any good? If they wipe the dust out of their thought, it will become crystal clear to them what social media has done or what not? Access to emergency resources and money in crisis, social media have made possible. The Red Cross huge fund round about $5 million collected from text messages in a day after Haiti earthquake is an example which proves social media is no less than a boon to humans. Moreover, it has made the world a global village, strengthened their relations, and provided access to far-flung areas, commodities and nations.

Social media despite having innumerable benefits, how can it be a curse? That’s open question which needs justification.